Hellooooo! For those who don’t know, along with a few friends I’ve been making an ultra low-budget indie horror movie called IMPURITY. It’s been A LOT OF FUN! I’ve finally got an assembly edit put together and hope to complete the full edit by October. In the mean time, I’ve put together a trailer which can be seen here:

Go on, you know you want to watch the trailer to a film by “the British Tarantino”… 😉

All feedback much appreciated! 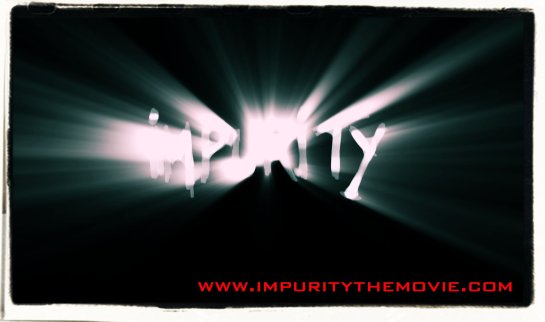 Shotgun Jimmy is a nasty piece of work. Ripping off drug dealers, killing policemen, he’d decapitate his own grandmother for a sack full of loot. Schizophrenic, psychopathic, his only friend is Mary the Shotgun – his trusty, reliable pump-action. But during a violent road-rage incident, something goes horribly wrong and Jimmy finds himself chained in shackles in a dark, grimy dungeon where he ponders over a deeply buried secret past…

Tomas Sorescu’s been a bad man. He likes his whiskey. And brandy. Vodka, rum or gin? Hell, he’ll drink petrol if it isn’t nailed down. Only now he’s done a rather silly thing. He’s crashed his car – and killed his wife and little girl in the process. Tomas feels pretty bad about the situation. So bad, in fact, he needs another drink. But then it gets worse as a tall, powerful, gas-mask wearing figure pulls Tomas from the wreckage and introduces him to a special place…

Sophie Scott is a successful career journalist in the sleepy village of Ramsbottom. Happy and confident, she now hides a secret… For a few weeks earlier, she killed her husband. Stabbed him in the guts and buried his body in the woods. Now, his restless spirit haunts her, and she hears his mockery at every street corner. Sophie starts to believe she’s going mad. Then, whilst following up a murder story in the woods, she visits an old witch called Alice – and within minutes, meets the gas-masked figure known as Chemical Man. Meets him, and ends up in the boot of his car.

All three characters awake, chained and shackled in a cellar dungeon. At first they squabble like children, but soon realise their abductor is far from sane. However, Chemical Man doesn’t want to kill them. Not yet. First, he wants to purify them. He sees their souls as stained by the impurity of their dark deeds… and this cleansing process promises to be a lot more painful…

So think about it.

Have you done something bad?

Maybe you’ve slipped into the shadowy, parallel world of Gehenna?

If you have, Chemical Man is out there.

Welcome to the world of CHEMICAL MAN.