An Impossible War by Andy Remic – Out Now!

I’m thrilled to announce the release of An Impossible War from Tor. An Impossible War is the omnibus edition of my three novellas set during World War One, and merging the adventures of tommy Robert Jones, with a very dark and twisted fantasy setting.

“Robert Jones signed up for the British Expeditionary Force with visions of honour and glory, of fighting for king and country, of making his family proud at last. He got an eternity of muddy trenches, clouds of poison gas, and a bullet for his troubles. Despite the mundane horrors of the Great War, however, things were about to get much worse.

As armies begin to shapeshift into demonic entities, a new face of war is displayed. The Great War has been chosen as the battleground in an eternal, metaphysical struggle, and Jones finds himself caught in no man’s land.

An Impossible War collects in a single edition all three parts of Remic’s demonic tour de force: A Song for No Man’s Land, Return of Souls, and The Iron Beast.

At the Publisher’s request, this title is being sold without Digital Rights Management Software (DRM) applied.” 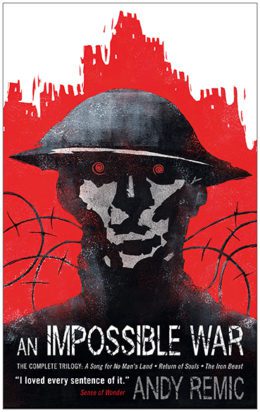 Yes, those “Crazee Fools” have not only reviewed my book The Iron Wolves, but accepted “The Wolf Pack” into their homes, and worn the t-shirt and sent me a picture!! Crazeeeeee (just drug him and get him in the plane)!!

Here’s the first, Phil and Pluto from Grimdark Reader – http://grimdark-fantasy-reader.blogspot.co.uk/2013/12/review-of-iron-wolves-book-1-of-rage-of.html 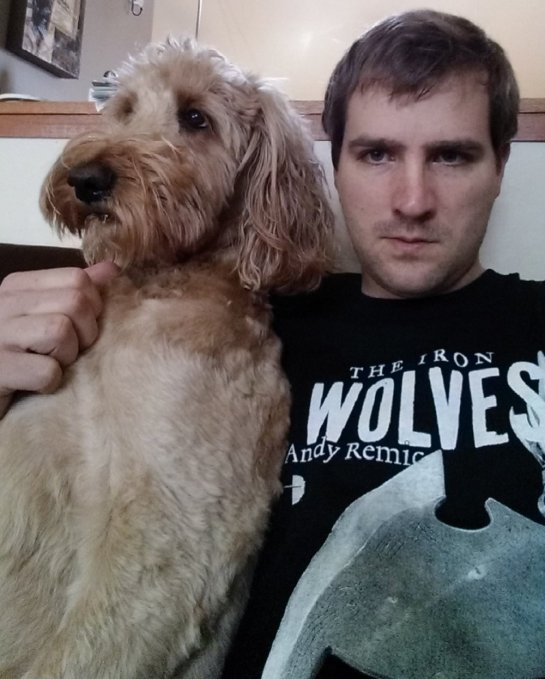 And then there’s Crazeee Bob at Beauty in Ruins – http://beauty-in-ruins.blogspot.co.uk/2013/12/fantasy-review-iron-wolves-by-andy-remic.html 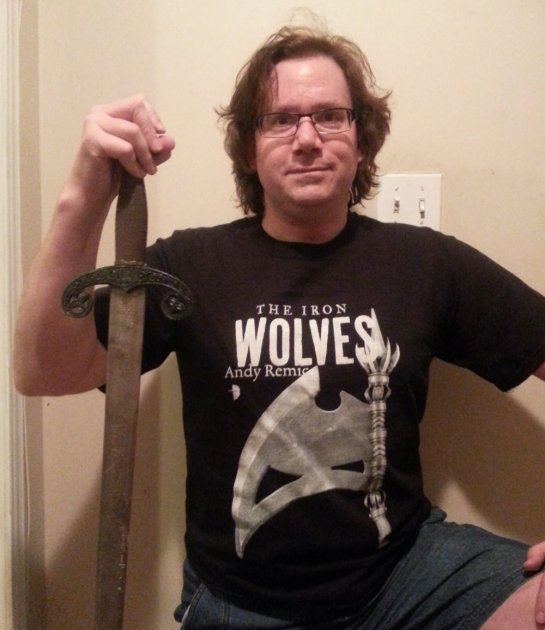 Sooooo……. if you’re a blogger/reviewer, and fancy a free t-shirt (and other goodies) for a review (good OR bad!) then there’s a couple left, so get reading 🙂 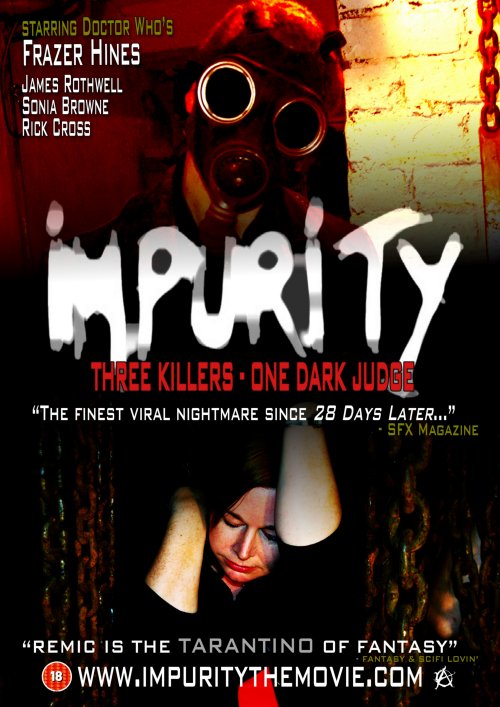 Yes, er, I am now on IMDB as a “Director”. It’s a very strange feeling (a bit like jumping naked into shark infested waters) and I feel like I’m now swimming in a much larger, vicious pond. Should be…. fun!!  Ha!!

And the entry for my feature film, Impurity, which is currently in post-production, here – http://www.imdb.com/title/tt3401658/

It stars Frazer Hines, who played “Jamie” in that little BBC show, what’s it called again……? Oh yes. Doctor Who.

It would seem this Christmas I am blessed, and indeed, it has come early!! Not only did the postie bring New Model Army’s latest album, Between Dog and Wolf (my favourite band), he also brought the audiobook version of my new novel, The Iron Wolves. Coincidence – with all this wolf-themery? Surely not?? (I wrote TIW end 12/early 13). The NMA album is absolutely brilliant – really thundering tribal drums, subtle harmonies and cool lyrics (and considerable bravery with NMA doing something new and original). And, ahem, a very good aural accompaniment to the reading of my book, as its very Celtic, moody, dreamy, tribal.

Napoleon Ryan’s reading of my book is amazing, professional and growling/spitting/snarling as required. Well done that man!! Well impressed (although I still wanted Brian Blessed to do it).

So then. Maybe this year I’ll have a good Christmas!!?? 🙂 Here’s hoping. Last year’s was….. Not Good. “And the things that followed? Well. None of that was supposed to happen.” (c)2014 http://www.impuritythemovie.com/

(and can I just say, the quality of the hardback album/book is like nothing I’ve ever seen in music before; absolutely luxurious, from the glossy paper, Joolz’s artistry, the whole quality feel – I want to eat it).

(my liccle film) Impurity the Movie –

I’m currently engaged in promo tasks for The Iron Wolves, published by Angry Robot (31stDec US/1st Jan UK). I have a very limited time window for doing these, so if you want me to do a blog post, or an interview for your blog/ review site/ magazine etc., please drop me an email with your request / questions during December. Thanks!! Andy Rem.   jappoc@hotmail.co.uk 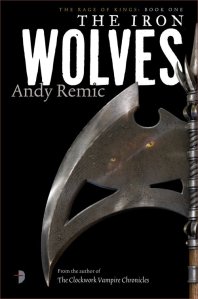 I have a new interview up at Vampirisme.com – it’s in French though, so you’ll you have to be able to read French. Or paste it into a translator. I could make it easy and post the English version – but I won’t. Ha ha!! [Evil vampire cackle].

My new book THE IRON WOLVES, a fast-paced, violent, dark fantasy full of violence, hatred and (yes!) some small slivers of honour, is published January 2014 by Angry Robot Books.

In time-honoured tradition, I am whoring myself for promotional purposes in the month of DECEMBER 2013. So, if you fancy interviewing me (in the pub, Skype, or via email; I’ll drive to you as long as you get the first round of Hobgoblin in) or joining my BLOG TOUR (now I feel Rockstar!!) then please let me know. If you have a current blog theme, let me know that and I’ll link in with it so it’s not just shameless pimping (yeah, right!!). I just need a topic, word length and deadline.

If not, absolutely NO WORRIES. I know how jolly busy we all are!!

Below is the blurb. Photos on request (I’m doing a new photo shoot tomorrow and really, really dreading it; although I do have fabulous breasts).

I’ll also be pimping my soon-to-be-released horror movie IMPURITY, starring the one and only FRAZER HINES who played JAMIE in DOCTOR WHO, at the same time. 🙂

What do you get out of it? Well, I can supply a “reviewer’s thank-you pack” – currently an IRON WOLVES poster, bookmark and t-shirt. And you’ll also benefit in some media fallout – especially if we get drunk at interview and show our big hairy bottoms.

Oh yes. ARCs (Advance Reader Copies) are now available in paperback from Angry Robot. So drop them a line if you want a review copy. 🙂

Many thanks if you read this far,

THE IRON WOLVES by ANDY REMIC

Thirty years ago, the Iron Wolves held back mud-orc hordes at the Pass of Splintered Bones, and led a brutal charge that saw the sorcerer Morkagoth slain. This ended the War of Zakora, and made the Iron Wolves heroes.

Now, a new terror stalks the realm. In hushed whispers, it is claimed the Horse Lady, Orlana the Changer, has escaped from the Chaos Halls and is building an army, twisting horses, lions and bears into terrible, bloody hunters, summoning mud-orcs from then slime and heading north to Vagandrak where, it said, the noble King Yoon has gone insane…

After hearing a prophecy from a blind seer, aged General Dalgoran searches to reunite the heroes of old for what he believes will be the final battle. But as mud-orcs and twisted beasts tear through the land, Dalgoran discovers the Iron Wolves are no longer heroes of legend… Narnok is a violent whoremaster, Kiki a honey-leaf drug peddler, and Prince Zastarte a drinker, a gambler, amoral and decadent: now he likes to hear people scream as they burn…

United in hate, the Iron Wolves travel to the Pass of Splintered Bones; and as half a million mud-orcs gather, General Dalgoran realises his grave error. Together, the Iron Wolves hold a terrible secret which has tortured them for three decades. Now, they only wish to be human again…

This is the new 2 minute trailer for Impurity the movie, starring Doctor Who’s “Jamie”, Frazer Hines in a very different role! The film also stars James Rothwell as Shotgun Jimmy, Sonia Browne as Sophie Scott, and Rick Cross as Tomas Sorescu, professional alcoholic. Hope you enjoy!! Please share on facebook/twitter if you do.

Hellooooo! For those who don’t know, along with a few friends I’ve been making an ultra low-budget indie horror movie called IMPURITY. It’s been A LOT OF FUN! I’ve finally got an assembly edit put together and hope to complete the full edit by October. In the mean time, I’ve put together a trailer which can be seen here:

Go on, you know you want to watch the trailer to a film by “the British Tarantino”… 😉

All feedback much appreciated!

Shotgun Jimmy is a nasty piece of work. Ripping off drug dealers, killing policemen, he’d decapitate his own grandmother for a sack full of loot. Schizophrenic, psychopathic, his only friend is Mary the Shotgun – his trusty, reliable pump-action. But during a violent road-rage incident, something goes horribly wrong and Jimmy finds himself chained in shackles in a dark, grimy dungeon where he ponders over a deeply buried secret past…

Tomas Sorescu’s been a bad man. He likes his whiskey. And brandy. Vodka, rum or gin? Hell, he’ll drink petrol if it isn’t nailed down. Only now he’s done a rather silly thing. He’s crashed his car – and killed his wife and little girl in the process. Tomas feels pretty bad about the situation. So bad, in fact, he needs another drink. But then it gets worse as a tall, powerful, gas-mask wearing figure pulls Tomas from the wreckage and introduces him to a special place…

Sophie Scott is a successful career journalist in the sleepy village of Ramsbottom. Happy and confident, she now hides a secret… For a few weeks earlier, she killed her husband. Stabbed him in the guts and buried his body in the woods. Now, his restless spirit haunts her, and she hears his mockery at every street corner. Sophie starts to believe she’s going mad. Then, whilst following up a murder story in the woods, she visits an old witch called Alice – and within minutes, meets the gas-masked figure known as Chemical Man. Meets him, and ends up in the boot of his car.

All three characters awake, chained and shackled in a cellar dungeon. At first they squabble like children, but soon realise their abductor is far from sane. However, Chemical Man doesn’t want to kill them. Not yet. First, he wants to purify them. He sees their souls as stained by the impurity of their dark deeds… and this cleansing process promises to be a lot more painful…

So think about it.

Have you done something bad?

Maybe you’ve slipped into the shadowy, parallel world of Gehenna?

If you have, Chemical Man is out there.

Welcome to the world of CHEMICAL MAN.